Let us start with definitions. Diversity is being invited to the party and Inclusion is being asked to dance.

We spend one day annually on IWD (8th March) discussing how far we are from the above goals. The issue of gender inequality is so prevalent that we've actually had to dedicate a day to pause and reconsider perspectives on issues women face in various facets of life.

Has it always been so? Let's peek into our history or the scriptures and see as its generally not where we often go for this debate.

The History of Inclusion and Diversity

Hindu Mythology clearly reveals that any idea of man being superior to woman is pure human invention. Infact, there are thousands of texts lauding gender equality in every sphere starting from "Manusmriti" which clearly states that “a home where a woman is not happy will be a home that never prospers”.

The Inuit of Artic region believe that the first 2 humans were men and one turned to a woman to grow the civilization. It is their way of saying the gender doesn’t matter.

Aztec mythology glorifies and speaks of the effeminate powers of the king which we today try to inculcate and speak of as EQ of a true leader, qualities like empathy, collaboration and ethics.I purposefully picked these examples as they are 3000+ years old as some of the religions are new in the era of time.

Vikings known for being machismo had Odin described as someone who indulges in a practice of Seid or ‘cross dressing’ to explore his feminine nature. All humans are made of both masculine and feminine just to reiterate the obvious. A better way to see inclusion is not to see people by gender but ourselves with 2 distinct traits (masculine and feminine). Infact the Jain monks described this best 1500 years ago where they write that these traits are felt in body, emotionally and through sexual orientation. And the combinations can be any.

Japanese Shinto mythology speaks of androgynous Inari where male and female are considered equal, a lot like the mythological image of the ‘Ardhanareshwari’, a form of Shiva we imagine. So the topic of gender equality is not something modern management imagined. We must wonder why did we land in this place in a human created problem?

Chinese Taoism speaks of 8 immortals and one of them is often described as a woman. Yet in modern explanations, these are suppressed. Do I list more? What have we got ourselves into today in a supposedly far more educated world and civilized?

Have you seen workplaces where women unconsciously seeking permission, validation, and inclusion. A majority of women lose confidence when they take breaks for child birth or relocation and workplaces are finding it so hard to attract, integrate and provide that much needed boost to this segment.

The single biggest emotion in a “career mom” is guilt. Do dad’s feel the same proportion of guilt? The extreme undue pressure from self and the system to be an expert in every sphere - at work, mother, running a home - is worse than a pressure cooker. How many generations do we need to correct these human invented problems?

We need to equip men with peeling their unconscious biases – discover, acknowledge and change starting from schools. Three decades ago, women in Iceland stopped work at 3 PM instead of the usual 5PM since they were paid 30% lesser than men. That shook a society. They even united on the home front and stopped household work till the men participated. We need such revolutions happening in 1000’s of workplaces or homes to move the needle. With all of us stuck at home due to Covid, some of the gender specific roles have been blurred. So we don’t anymore think of cooking & cleaning as the domain of a woman. How long will this change last?

Gender equality will come when we have tough dialogs at the dinner table and make it personal, challenging assumptions and biases. We are doing too little as a country, as corporates, and even as individuals.

It’s time for #GenderEquality & what have #YOU done for it? 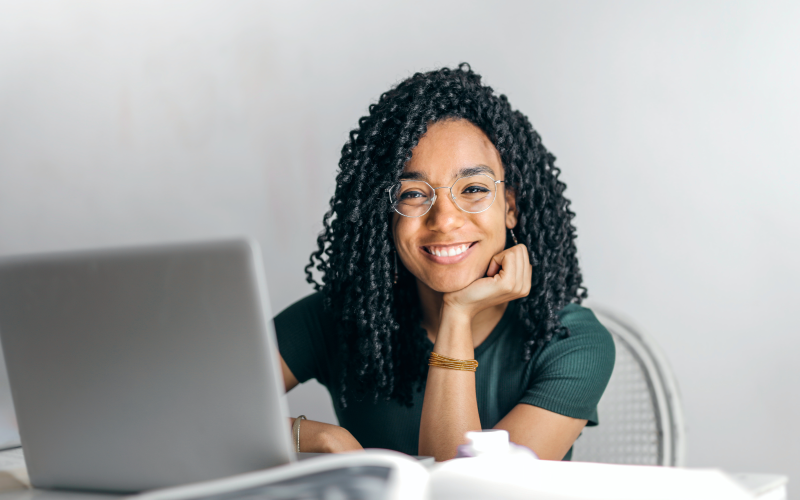 So, here are 6 simple practices an organization could master to drive Gender Parity

Every company wants to attract Unicorns and JDs are written to reflect super heroes. HR has a big opportunity to distil the work to its essence and reconfigure what gets done by whom and make them inclusive and gender neutral. 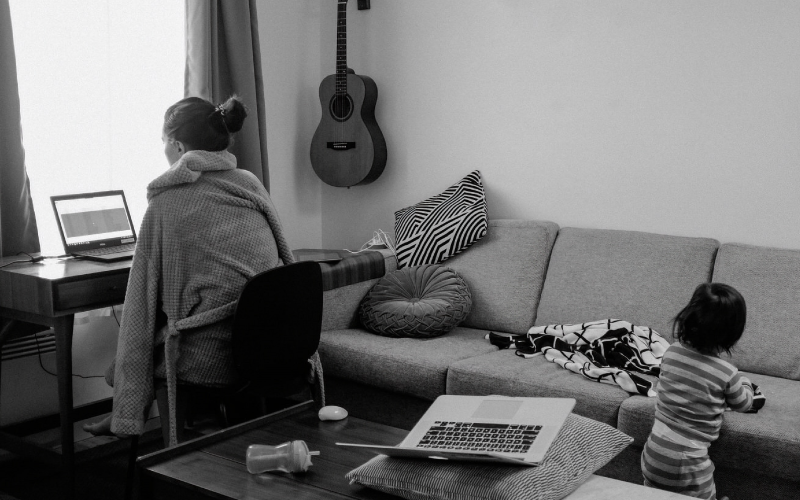 This brings flexibility in choices of talent (part time, contingents, stay at home moms with only 2-3 hours available, disabled individuals). It also demands new practices in orchestrating how the work gets done, measured, rewarded etc. The field of HR is facing a major disruption requiring adaptation of its traditional processes and norms to an agile, fluid, and distributed work environment.

Have you ignored this talent segment? At your own peril

So many jobs unfilled, trillions of untapped dollars in GDP yet, women over 50–go un-tapped, under-utilized, underpaid, or unemployed. When re-entering the workforce, women, have more difficulty sustaining their income level, let alone growing it.

The most shocking statistic is that half of the long-term unemployment in the US is comprised of women between 55 and 65. On the other hand, women 55+ represent the single fastest growing age-gender segment of the American population in the labor force. Their share will account for more than 1/3 of additional workers entering the labor force over the next decade. This is a perfect example of a segment along with retired or seniors with big potential for companies to attract.

From Techno-phobia to Digital Fluency

Fear-inducing headlines about the machines taking over, artificial intelligence (AI) replacing humans, and millions of jobs disappearing are everywhere. Whether or not that will pan out is to be seen, but we can’t dismiss that both organizations and individuals need to consider the multiple aspects of digitization and prepare for it. 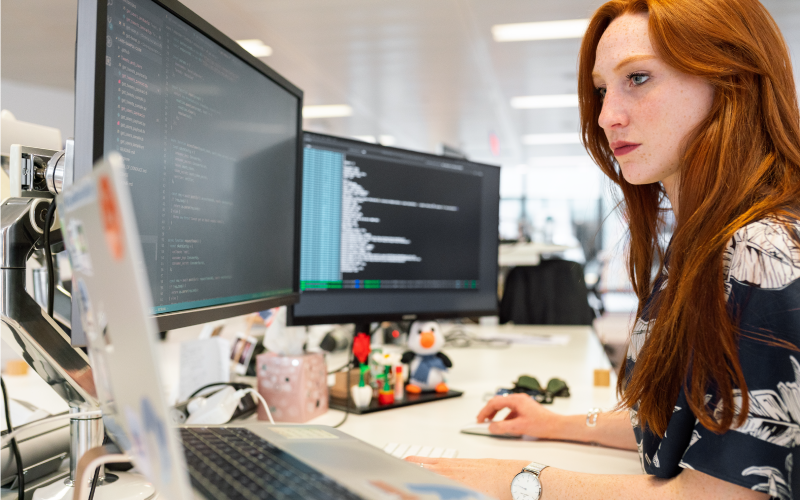 In the IT revolution of the 70’s a startling thing happened. Average pay halved, yet a western total household income stayed stagnant. That is because the workforce of women doubled due to a pay crisis. This time we could be better prepared by equipping the potential workforce.

Equipped with technical and design skills, women can also influence the development of more inclusive technologies which in turn can open new customer segments and market opportunities to sell your products.

From Lay-offs to Upskilling

Over the past decade, we have remained static on the employment numbers globally and signs are it is going the wrong way.  With a turn to global growth and with fewer digitally-savvy candidates on the market, companies now have to rethink their workforce strategies and instead invest in upskilling of their workforce.

An example of a scalable model for growing hybrid skills, is provided by amazing.community. The non-profit creates a supportive environment for women to learn about design thinking, accessibility testing, AI and chatbots, then applying these skills to co-create a chatbot responsive to the needs of women 50+ (amazing.bot). 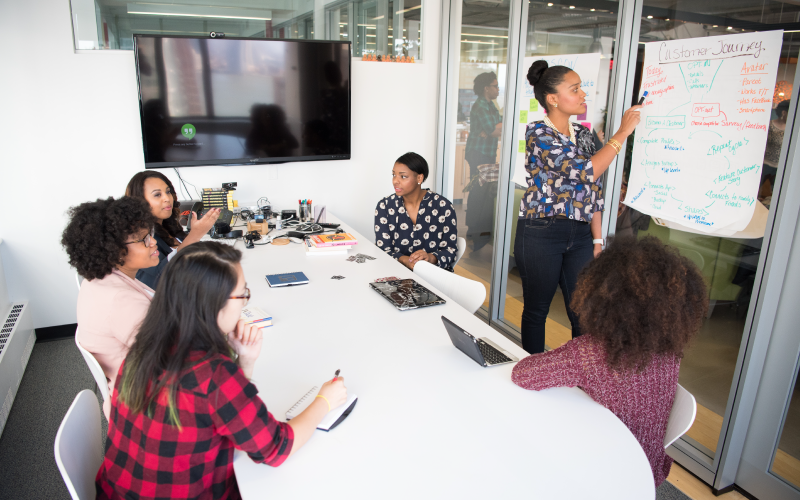 The idea is to distil complex topics into simple and digestible modules, build comfort level with them, and ultimately to lower the barriers of entry for non-digital-natives so they can transfer their skills to new spaces where jobs abound.

Upskilling is not only good for the business, but also is a responsible way to uplift communities, and have a positive impact on their brand, which in turn will attract more high-quality talent.

Augmented Analytics use is on the rise. Algorithms are built to look at what made people successful in the past, creating models that rapidly sift through thousands of résumés to find the “optimal” individuals, and bring more of them into the organization.

There are some inherent flaws with this thinking–the definition of success in the past might not be what companies need for the future, and algorithms trained on old data might perpetuate old biases. It is important to raise awareness with hiring managers and recruiters about such flaws, especially when it is a matter of giving a chance to someone with a long résumé that might have big career gaps (not always associated with typical “success” criteria).

Mind the (pay) gap to Parity for All

Regardless of the progress we’ve made thus far, unfortunately, women still don’t get their fair share. At current pace, we need 2 centuries to gain global parity in gender. Gender pay gap widened in 2017 and now at -22% in the USA. Take a stand NOW

The fact that your company needs a Board agenda, a charter or mandate and many serious interventions shows that “equality” is not embedded in the culture and there is deep rooted issues to sort. Nothing wrong if something is wrong. The question is - is there enough will to make it all right in a short span of time? Why do organizations take incremental steps on such issues of global importance? New Age firms seem to be born a lot more equal. It may also be the Gen-Z who hopefully and luckily seem oblivious of the issues and seem to demand equality from Day 1

I would like to summarise that this is a top 3 global problem in case you had any doubt on its magnitude. This requires the home, workplace, government to work in coordination to eradicate in this life time. For my part, I am educating 150 economically backward talented girls on a 6 year scholarship (else they would have dropped out of school due to cost and marriage pressure).

For now, reflect and see if you are championing this cause in your own sphere of influence. For what you do, makes a difference to someone.

Major Benefits of Resume Parsing & How to Do It Right

Hiring Mistakes: Are your recruiters At-Fault?

Ask any business leader about their biggest challenge today, 9 out of…